I have written this tutorial because whilst selling cases and bezels on ebay, I was contacted by a few people asking if it was possible to change the DVD button and bezel without opening the case and voiding their warranty (which you must do to open the console usually). At first I didn’t think this was possible, but I decided to give it a go, and found that although a little fiddly, it is actually quiet simple!

The sticker will be damaged as soon as it is pulled away from the console, and it can’t be replaced. You should be very careful during this tutorial not to stretch the sticker, as this can also damage it. 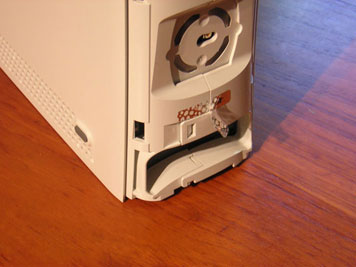 Also ensure there is no disc in the drive, and DO NOT turn on your console while performing these steps! You will need to eject the drive at some point to remove the bezel, so make sure you do this while the console is flat.

Tools: A small flathead screwdriver is ideal, but anything small enough will do.
Xbox 360: …well yeah! 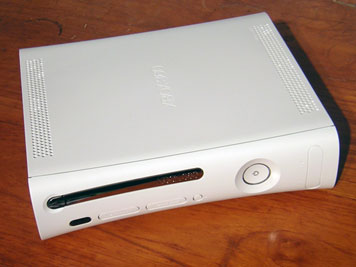 You need to first remove the facia from the console. I find it easiest if you hook your finger inside the front USB port door, and the case should just pop off. 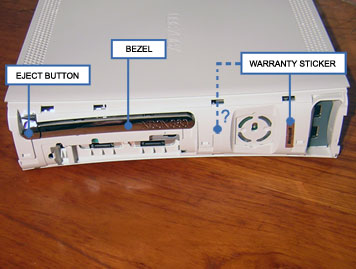 The top grey grill now needs to be removed. Pull the front of the grill out away from the console, it should come off with a little effort. The grill is then held in place by the four remaining clips, which can be seen if you look through the little holes on either side of the console. These can be unclipped with a small screwdriver. If you have trouble releasing the last clip, you may need to pull back the rubber foot next to the grill, which will reveal a small hole. You can then push the screw driver through there. 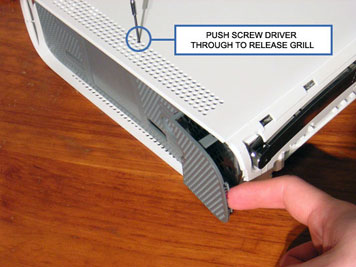 There are four clips on the front of the console. The one shown in the photo needs to be unclipped. This can be done with a small flat head screwdriver 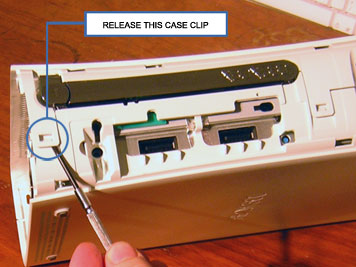 (the image below is a couple of steps ahead, but is intended to show you where things are located for when you remove the button.) 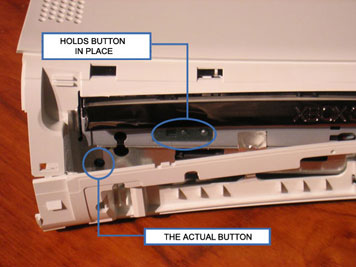 The case can be pulled apart with a small amount of force, and needs to be held open whilst removing the button. Keep an eye on the warranty sticker, and don’t overstrech it.

You don’t actually need any tools to remove the bezel, a fingernail will do. I have turned the console upside down to get a better angle, but this is not necessary.

The bezel needs to be pulled away from the DVD drive at the bottom to release two clips. Once the clips are released, the bezel will slide off. 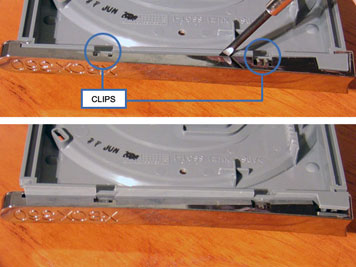 You have now successfully removed the DVD button and bezel. Replacing or swapping these is just the reverse of this tutorial, and is pretty obvious. 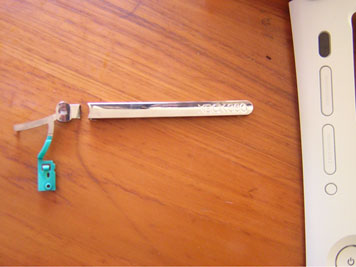 Hey, so I just removed my bezel, It seems it was preventing the disk drive from opening properly. I intend to play without it altogether. Does that sound safe? I realize dust could get into the disk drive a bit more easily, but it seems to me as long as I keep my xbox on a clean surface it should be fine right?
opinions?

Thanks for the tut! With a black faceplate and the chrome trim, it looks a lot better under my TV than the beige box of the Arcade.

It was easier to have two people. In my case, my wife swapped out the button before I could coach her through it.

If I could like to change the case to black without voiding the warranty! Now that would be something.

Holding the case open was a pain though it may of been easier if another person hold open the case while I removed the eject button.

There a few tinny marks on the label and the middle tab broke but the seal is not broken.

thanks a lot, transferring the chrome eject button & bezel from my old premium to my new arcade worked like a charm
keep up the good work!

If you were going to sent the console back to Microsoft I would recommend fitting the original bezel / button.

This guide worked good except the bezel wont come off unless the top of the case is removed.
So I just replaced the button with the unit off and turned it back on and opened the dvd drive and slide the old bezel off and the new one on to complete.

I was looking for the bezels online,found you ebay shop and this guide. I streched my sticker alittle, but hard to tell. Other post was also right, it was A LOT EASIER TAKEING BEZEL OFF FIRST, BUTTON SECOND. Thanks for the help.

Thanks dude. It really worked great and the pictures helped out even more. Thanks again.

This helped me tremedously! Now my Arcade looks just like my old Pro model. Thanks for the great tutorial!

P.S. I found it more helpful to take the disk tray cover off FIRST so that you can take the eject button off easier, and so you don't have to manually open it.

I wish my Playstation 3 would be as easy to fix, thanks for the great illustrated guide.

I done it yay, Almost ripped the sticker in half! LOL. Looks great now. :P